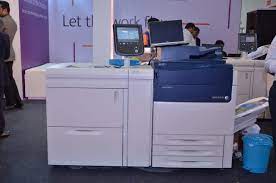 Since 2001, Xerox has never missed India’s premier Printing and Graphic Arts Industry exhibition, PrintPack India 2017. At the recent 13th edition, we met Balaji Rajagopalan, Xerox India on the Xerox Stands. He found a pretty enthusiastic response from every participant and visitor to Xerox’s showcase area. “The visitors have represented every part of the country. Overseas visitors too thronged stands quite regularly,” he said. 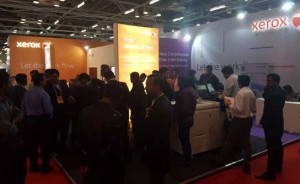 Xerox has launched its C70 powered with new Fiery FS200 and FS200 Pro software. Apart from the new Fiery power, the Xerox C70 comes with new enhancements over its already popular predecessor in the country. The C70 already features unique attributes like up to 45 percent power saving capabilities, low heat emission enabled by its low melt toner technology. Media handling has been enormously enhanced in the new C70. From 300gsm simplex to 250gsm duplex, it now has a long list of media compatibility ranging from photo media to those for magazine, commercial and other documents. Xerox has particularly taken care of the feedback it got from practical use of the machine and has now incorporated them to give a better and enhanced real time experience to customers. It’s a pretty nice package with Fiery capabilities, improved media handling and saving on power and cost to help those who are looking at the entry production space. Xerox brings the C60/70 series with 60ppm and 70ppm capabilities. Now, with the new C70, it presents an opportunity for all previous users of C60 to consider an upgrade to 70ppm platform as well with the bonus of enhanced capabilities.

Xerox Versant 80 is the flagship product from Xerox with a leading market share in mid-production segment, not only in India but also in the DMO (Developing Markets’ Organization – a group of over 150 countries). The Versant 80 with banner printing option is pretty popular with printers who have gained a lot on profitability, quality, customer confidence and repeat business.

Adding about C70, Balaji says that this is one product which has been recognized as a product of choice by test labs. “Production printers have always been appreciative of consistency and stability of the quality along with reliability, which are very important aspects from a customer’s point of view. India being a job-work community, the print quality consistency can really give the power to the printer especially the test labs,” he asserts.

Balaji terms their new focus area as the ‘win-win-win’ situation. “With the FreeFlow now being given to Fiery, it’s a win-win situation for Xerox, Fiery as well as the customer,” he explains. The FreeFlow has lot of futuristic features. FreeFlow has got Fiery capabilities, that are unmatched especially in Digital Front End space. The ultimate winner is customer who has the greater and combined advantage of FreeFlow and Fiery. Indian print industry especially the labs, job printers, offset printers etc. all need reliability, consistency in quality and media handling as key requirements in any equipment. If a printer wa 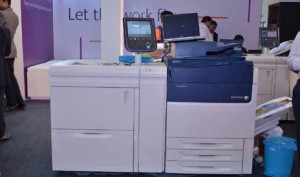 nts all these and gets a fantastic workflow to streamline all these jobs, it’s a huge advantage in terms of efficiency and output. “The workflow makes all the difference if we are opting for a different speed machine as per our requirement. All that’s gained on speed of a machine can eventually be lost if the workflow support is not as smooth (as a Fiery enabled FreeFlow is). Xerox is proud to offer its customers a Fiery powered print engine and FreeFlow workflow as per individual requirement. Our aim remains to give peace of mind to customers while using Xerox solutions and we ensure they get their return efficiently. “Our concentration remains on making this aspect of Xerox solutions stronger by each day and that is what keeps Xerox ahead of its competition.”

The high-end focus of Xerox has been reaping huge success for the company. The Xerox 1000, Nuvera etc. all are doing tremendous business. Apart from leading players in India, world over, high-end print production machines from Xerox are proving their unique capabilities especially in the security printing area. Nuvera has been extremely well. “Post demonetization, Nuvera has seen good growth. There’s no other machine in the world with Nuvera like capabilities. We are the world leader in this space. Security printing like Cheque Book printing is the forte of Nuvera which is simply unmatched anywhere,” says Balaji. There are many customers who have placed repeat orders for this highly capable machine. Manipal of India has increased its lineup to double digit numbers in a short span of just one and a half years. There are other customers, not only in Security or Cheque Book printing but also in Publishing and Variable Data Printing space. The versatile machine is capable of delivering same high standards in printing of all these products.

The Xerox D series is for customers who are looking for a printing solution where space is limited. The series offers good price advantage and digital capabilities like variable data printing in the Light Monochrome production environments. It complements Xerox’s vast monochrome line up.

Xerox 1000 covers the high-end colour digital printing space. Then there is iGen workhorse. All these solutions offered at the PrintPack India 2017 are part of Xerox’s continuous development that features new products and customers can expect more from this Digital Printing major in future months. Balaji agrees that the demonetization had its effects on the industry. Xerox got the advantage of Nuvera which helped it keep the sales rolling. Things are approaching towards normal pace. He sees the advantages of cashless economy and opportunities thereof. Another thing he looks forward to is GST, which, he says, would standardize taxation across states and provide benefits of logistics to customers’ advantage.

Get the latest creative news from SmartMag about art & design.

© 2021. All rights reserved .Powered by @Pressideas . Developed By Solutions1313